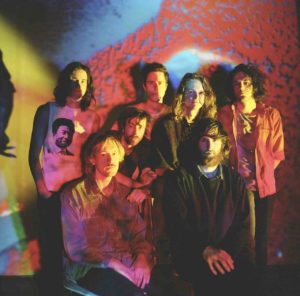 For a band that released 5 albums in a year, the past 12 months have been pretty quiet around King Gizzard and The Lizard Wizard. But a few days ago, the Aussie rockers returned with the new single Cyboogie. The 7-minute electric shuffle filters everything that makes up the band by a Moroder filter and lets assume that the 7-headed, constantly self-reinventing free-rock Formation has spent the last few months working exclusively with synthesizers. Cyboogie is just a taste of what we can expect from King Gizzard and The Lizard Wizard in 2019. After a sold-out US tour, festival concerts and tours in Europe, including London, Russia and Istanbul, Berlin is now expecting one of the band’s greatest shows in Germany.